Sowing the Seeds of Success at Vehicle Drop Off

Vehicle drop off is so much more than a customer simply handing over their keys. Just ask Jamey Whitlock, Doug Brackett, and Matt Fowler. These three experts of The Digital Shop sat down with Tom Dorsey for an episode of The Digital Shop Talk Radio to discuss why drop off is so important, and the way they have used that first interaction to create long-term success at their shops.

“The reality is that a lot of us, as digital shops, are forging the way forward for our industry,” said Doug, owner of Downtown Automotive, in Nelson, British Columbia. “One of the big challenges that we have in doing that is we’re undoing a whole lot of training that these customers have had at shops that are maybe a lot less professional than your typical digital shop. So we really have to work quite hard to blow away some of the myths that are already in [customer’s] head about what their experience is going to be like. You know this is pretty straightforward when there are customers that know us really well, that have had the experience before. But to our new customers, we really have to retrain them on the whole process involved.”

Since digital shops are often offering a new experience, there are four areas Jamey, Doug, and Matt focus on during drop off; communication, setting expectations, building rapport, and selling.

Communication comes in several different forms for those using a digital shop, and the first step, according to Jamey, the owner of Whitlock Automotive in Dripping Springs, Tex., is having a conversation.

“We’ve made a big change going from being a paper shop to a digital shop,” he said. “So, we want to make sure that the customers know how we’re going to communicate with them.”

Jamey is candid and purposeful during that initial conversation.

He told Tom during The Digital Shop Talk Radio Episode 32 that he preps his customers, “You’re going to get a text message. Opt into it. This is how I want to communicate with you.”

From there, he goes on to explain his shop will be sending information through text messages about their car, including maintenance reports and notes about when it is time to pick up the vehicle.

He is very thorough with his initial conversation because he is trying to ensure motorists receive all the perks that come with a digital shop.

“I don’t want them to get a text message and go, ‘I just left there, why are they text messaging me?’ and opt-out,” he said. “I want them to opt-in because that’s what we’re trying to accomplish here. We want to be able to communicate with them easily.”

Another part of communication at drop off includes explaining the shop's process, specifically what is going to happen and why.

“The other day I had a guy that walked by my door and go, ‘Hey, how come that guy is taking pictures of my car?’” Jamey said. “I was like, ‘Ah, man, that’s a bad job on my part.’ I should’ve pre-handled that. I should’ve said, ‘Hey, we’re going to send you pictures of your car,’ and he would’ve known what the guy was doing.”

Priming the customer with these explanations is especially important for those who are new to a Digital Shop since many things are different than a traditional shop.

Jamey has found offering up a thorough explanation of what the shop is going to do and how they are going to communicate allows motorists to feel a little more settled.

“They don’t have the stress of, ‘My car is broken, these guys are going to take all my money, and they’re probably going to try to sell me a bunch of stuff that I don’t need,’” he said. “Now, we’re just going to give you all the information, and we want you to tell us what you want to do.”

Matt, the service manager at Airport Automotive in Colorado Springs, has a few other tips for ensuring smooth communication.

“I swivel the screen around, and I show them a live example of how a diagnosis reads,” Matt said. “If they’re just like, ‘Yeah, yeah, yeah,’… I’ll tell them photos are interactive. If they really get that look in their eye like, ‘Oh my gosh,’ like everything is caving in, now I’m like we’ve got to slow down.”

Using their AutoVitals Business Control Panel (BCP), Matt, Jamey, and Doug can all see the benefits of priming the motorist. They can track the metrics that directly impact their ARO and make educated decisions to continue to improve.

Once you have explained how your shop is going to communicate, the next step is to set expectations.

“One of the big things that has always been really important for us is using [drop off] to start setting up expectations with our customers,” Doug explained.

This isn’t only for the benefit of the vehicle owner; it also benefits the shop.

Doug believes laying out all the steps at drop off is critical for customers to do what they need them to do as well. It all goes back to educating those who are new to the digital shop.

One aspect of the digital shop experience is the Digital Vehicle Inspection (DVI), a detailed and interactive assessment of your vehicle. With features including detailed text inspection results straight to the vehicle owners' phones, edited pictures explaining areas of concern in the car, and educational videos, new customers require an introduction for the DVI to be successful.

Once the expectations have been set and the DVI has been explained, people are often pleasantly surprised.

Doug went on to say, “Our job is to say, ‘Hey, we’re different, and we think we’re better, and this is how we want to do it, and this is what it means to you…I think that’s what we’re all trying to accomplish is that we want to give the customer something they can’t get anywhere else.”

After expectations are established, it is time to build confidence and rapport with your customer. Doug has an easy way to do that right off the bat using small wins.

Smart Appointment and Service Reminders are also features of an AutoVitals digital shop. This software automatically detects whether there are open items from the last visit and reminds motorists of the work previously recommended. 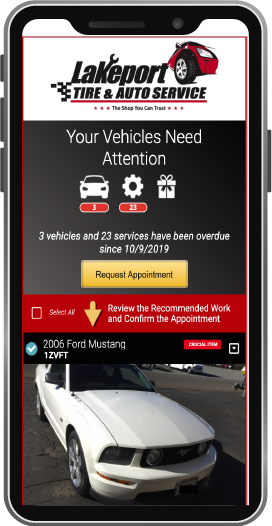 Those little wins build on each other, and then, when it comes to the big things, motorists are going to trust you to do what you say.

“They extend that confidence into the whole interaction,” he said, including the auto techs. “We say we’re going to do something, we’re going to follow through and do it properly.”

Building customer confidence has been a game-changer for Doug, especially when working with those who are inherently distrustful of his industry.

“[The customer can] see that we’re doing things differently from every other interaction that they’ve had in any other shop previously,” he said.

Matt also pointed out that building those relationships with vehicle owners can happen even before they set foot in your shop.

He and his team use those calls to gather information such as name, phone number, and email. When a booking happens, they can then immediately send a confirmation with a 24-hour notification.

“If you get the person who still maybe isn’t fully convinced, when it’s backed up with, ‘You now have an appointment, we will expect to see you on Wednesday,’ it just kind of follows the flow of we’re taking this serious,” Matt said. “We’re not just answering the phone hoping you show up, we’re going to fortify it.”

4. Spreading the seeds of sales

The final step in the process ties into every other part of the drop off, and that is selling.

For Matt, the selling process starts when he lays out how he is going to communicate with his customer. He tells them what to expect, when they will hear from him and when he is going to “bring in the punches as far as pricing.”

He continues to mine for information throughout the drop off so he can understand who is making decisions, what time-frame they have in mind, and how they found his shop. This information is helpful during the sales process.

If they were referred, Matt uses that information to sell. He has also found that by running through these steps during drop off, they are setting themselves up for a productive relationship down the line.

“It’s like that harvest mentality of where, you know, if you plant all the seeds and water it properly, they’re just going to continue to pop out of the ground,” he said.

This is especially true for return customers. The team at Airport Automotive puts together an initial writeup, DVI, and estimate for the cars that they see. When those cars come back for an oil change, it is easy to show them what they did or didn’t do at their last appointment.

“It’s super seamless,” Matt said. “Hey, I know we held off on that fluid, so it’s time for the fluid with the oil change.”

It doesn’t require the team to go back to selling; instead, they can just show them the photos and information from their previous appointment, and some of those repairs will sell themselves.

Doug has seen the same thing happen at his shop.

“We’re in the industry where we create stress in our customers,” he said. “That is a big part of our job is to create stress in our customers, and then provide them an outlet. Provide them with a reasonable means to take that stress back away from them. Doing that with the education is really the first step that their stress just starts to go away. The more information they have in their hands, the less stress we create of ‘Here is what our technicians are recommending.’ The less stress affects them, they leave with typical AROs that are fantastic and smiles and handshakes. Like [Matt, Jamey, and Tom] were talking about, having those customers leave the shop, spending the money that they needed to spend, us doing the work that we needed to do with smiles on the face. That’s why we’re all here, right?”

Maintenance Mentality Has Paid Off Big-Time For This Small Shop

Aden McDonnell is no stranger to car shops. He grew up in the shop his parents opened and has...

Technology has made an enormous difference for auto repair shop owner Mike Button. Not only has his...