Time; a four-letter word that can be the difference between crew pushback or increased revenue at your auto repair shop.

“When we talk about pushback from anybody in the shop whether it be up front or in the back, it’s always time, time, time, time,” Jamey Whitlock, owner of Whitlock Automotive, in Dripping Springs, Texas, told Tom Dorsey during episode 23 of The Digital Shop Talk Radio.

However, Jamey has found a way to create more time and, ultimately, more success in just ten weeks. It started when Jamey was a guest on an earlier episode of The Digital Shop Talk Radio with a panel of digital shop experts including, Matt Fowler, the service manager at Airport Automotive in Colorado Springs, Colorado, and Bill Connor, an AutoVitals trainer. During episode 12, Jamey was able to ask questions and learn from Matt and Bill. He went back to his shop and turned that information into action.

One of the first things Jamey did when he got back to Texas, was to make some significant changes in his digital vehicle inspections (DVI) for his auto techs. Instead of having his techs write everything, he provided buttons with pre-formatted text for them to choose from.

Jamey noticed that when he made small changes so that the auto repair tech’s lives were easier, it started a chain reaction.

Changes didn’t stop with the techs. Service advisors are also an essential part of any auto repair shop, but if they aren’t working well with the techs and vice versa, they can create hours more work for each other.

Jamey realized after talking with the experts on The Digital Shop Talk Radio, he needed to show his entire crew how their role fits in to what the shop is trying to achieve. He demonstrated to the techs what it means for service advisors up front when they push buttons or select actions on the DVI. He made it clear that every person is part of the entire process, and by understanding how the system works, they can make the shop run more smoothly.

“You have to make them feel like they’re a big part of it, which they are, but they need to know how it works,” Jamey said.

“I think the technicians definitely got to feel like they were a part of it, not just, ‘Hey, I have to take some pictures, and the boss wants me to do that, or he will fire me.’ It’s like, ‘Hey, we’re trying to accomplish something here.’”

His service advisors have also “made a lot of steps in the right direction,” according to Jamey.

One example where he has seen a change is with picture edits. While the guys at the shop have seen a picture of metal on metal brakes hundreds of times, adding arrows and text to photos allows for motorists who aren’t as knowledgeable to quickly understand what they are looking at and what they need to fix.

“The thing is, is that we’re giving the customer all the information they need to understand what’s on this picture and what needs to be done so that really the thing that we want is for the customer to call us and say, ‘How much is it?’” Jamey said.

“We’re saving a lot of time,” Jamey told Tom. “I mean, we’re taking a phone call from a customer and getting work authorized in under sixty seconds.”

That is significant when you consider how many vehicle owners they previously had to spend five or more minutes with on the phone every day. Jamey estimates those auto inspection reports save him and his crew nearly an hour of phone time each day.

In addition to saving time, Jamey has also seen higher approval percentages. He has also realized by taking notes on the questions his service advisors receive from motorists, he can proactively add information to the vehicle inspections and save his crew even more time.

“That’s a learning situation there for you as a service advisor,” Jamey said. “It’s like if they’re asking me a question, ‘How could I have done that better on that report so that they didn’t have to ask me that?’ Give them all the information that they need. Now, of course, you can’t always be perfect, you’re not going to be, but I would say that conversation across the board has gone basically like this, ‘Hey, that’s the coolest thing I’ve ever seen with all those pictures, how much is all that stuff in the red?’”

Giving detailed motor vehicle inspections to motorists in a way they can easily understand, has also changed the idea of the “sales process,” at Whitlock Automotive.

“I mean, how many times do you call a customer and they’re like, ‘I have no idea what you said, just tell me how much it is,’” Jamey said. “Where here, they’re actually a part of the buying process. Notice I said buying, not selling. The customers are buying now, we’re not having to sell to them anymore. We’re telling them what’s wrong; we’re giving them all the information, and they’re buying."

This is a much different process than trying to sell services, according to Jamey.

Recapturing the customer and CRM has also become more straightforward with DVI.

“I mean, this will blow your mind,” Jamey told Tom. “Maybe it won’t, but it did me. I had a customer walk in the other day and go, ‘Hey, I need to drop my car off for service.’ I was like, ‘Okay, what do you need?’ He goes, ‘I don’t know, you texted me and told me I needed something.’ I was like, ‘Perfect. We’ll get that done for you.’”

Another area where Jamey has noticed time savings is with recruiting and training.

“I’m about to hire new service advisors, and when I was hiring techs, what did I do?” Jamey asked. “I take them over, and I show them AutoVitals.”

He walks potential hires through how work is dispatched, the entire vehicle inspection from picture taking, and editing to sending it to the customer and getting work approved.

“I tell you what; it’s impressive to look at if you’ve never seen it before,” he said. “It’s impressive when you have seen it, but you know, if you have a guy you really want, it’s another one of those ingredients.” 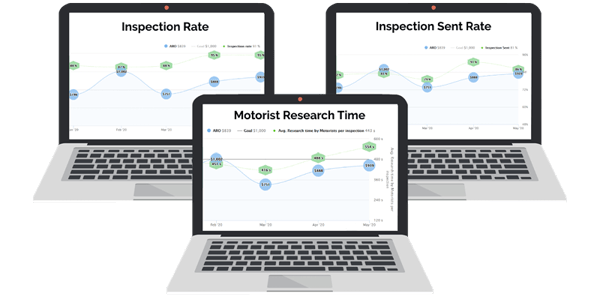 The BCP is a shop's hub for all things data, as you can gain an understanding of every measurable aspect of your shop.

Having the digital shop process in place has also allowed Jamey to become a much better teacher and trainer in a short amount of time.

“I can take an employee, get him up to speed way faster,” Jamey said. “That’s a huge step in the right direction, I think. Because anytime you can get your employees up, your service writers, if you lose somebody or promote somebody or demote somebody or open up another shop, getting this process down, making it better, you become a better trainer.”

While Jamey has made huge leaps and bounds in the 10 weeks since he first appeared on The Digital Shop Talk Radio, he has also run in to some real-world snags.

Time is still a challenge, even with all of the extra time they have created and reallocated.

“My shop is really busy,” Jamey told Tom. He has tow trucks showing up several times a day and people walking-in for new appointments on top of an already busy schedule.

“It’s really easy for us to - I’m going to use this word abandon, but it’s kind of a strong word – for us to abandon the process,” he said. “That means we start shortchanging these inspections. Maybe we just put on there what they came in for, or we run through all the green pictures and don’t really make any notes when we all know that that’s just as important as anything else.”

On top of that, he recently had a service writer quit, so he is short-staffed and going to have to train in a new hire when it already feels like there isn’t enough time in a day.

“We start to abandon those things, and that’s been a big challenge for us is trying to find time,” Jamey said.

He also has found another challenge; how do you balance cars that come in with a specific issue with making sure you are doing a thorough digital inspection?

“You know, a lot of the times, we need to get back to that customer pretty quick with, ‘Hey, this is what we need to do to get to an end result,’” Jamey said when customers come in with a specific concern.

At first, he had his crew do an entire inspection when customers brought in those cars, but sometimes the DVI wasn’t addressing the issue.

That led Jamey to switch how he was approaching these vehicles.

“One of the things that I’m trying to work out now is when I hand a technician or my ‘A’ tech that diagnostic and that car is sitting there after he’s diagnosed it or he’s put something up,” Jamey said. “Why am I not taking that time to go back over the vehicle and complete that inspection and just send the customer the rest of their car and utilize that time to generate extra services or just educate the customer on their car?”

He is also looking at segmenting the comprehensive vehicle inspection based on the vehicle ability and auto technician ability.

“If I can come up with a good way to do that, which still keeps the shop efficient, productive, doesn’t slow anything down,” Jamey said. “Like I said, it’s always about time, right?”

During normal times, the numbers Russ Crosby is producing at his auto repair shop, Russ’s Wrench in...

Saying goodbye to your whiteboards and paper doesn't have to be a lengthy process. Using our tools...