The Processes You Need to go Fully Paperless

Customers stepping up to the service counter at Downtown Automotive, in Nelson, British Columbia, are in for a pleasant surprise. Earlier this year, auto repair shop owner Doug Brackett implemented a paperless front end.

“This workstation is basically our most advanced piece of technology in the shop right now,” Doug told Tom Dorsey in an episode of The Digital Shop Talk Radio.

From the front door, the service advisor (SA) workstation doesn’t look much different than usual, but that changes when you get closer.

“We’ve recessed a monitor directly into the countertop,” Doug shared during a video tour of his repair shop in Episode 48, Modern Solutions to Service Advising Problems. “We can present authorizations, invoices, inspections, all from right here at the service advisor desk.”

This wasn’t always the case. Before going fully digital, Downtown Automotive used to go through reams of paper printing off paper authorizations.

The inset monitor has changed that. Each SA station has two computer monitors, and the second monitor is set up to mirror the screen in the counter. This allows the SA to walk customers through everything right at the desk.

“This is a really big step for us,” Doug shared. “I think most AutoVitals customers that are running SmartFlow, are actually paperless in the back end, and it’s long been our goal, to move that paperless process into the front end of the shop.”

Process change; the answer to your digital shop question

What made the implementation of a paperless front end possible? Process change.

According to Doug, the most useful thing he could pass along to other repair shops who are trying to implement more digital procedures boils down to one thing; process change.

“It is one of the harder things that I feel we deal with as people managers,” Doug told Tom. “Processes are easy to manage; people are hard to manage. When you get good at managing the processes and the process changes, it makes it easier on the people, right?”

At Downtown Automotive, when a process isn’t working, Doug and his crew identify the issue, and in order to improve it, they rely on feedback from everyone. He also isn’t deterred by having to change entire processes if they make his auto repair shop run more efficiently.

“That is one of the biggest challenges we always run into,” Doug said. “’How do we fit this into our old process?’ Well, maybe your old process doesn’t even apply anymore.”

Documenting the processes is also critical to success, according to Doug.

“You know, everything we do, we’ve got to standardize how we go about it,” he said. “Provide the same product every single time. That’s what gives us businesses that are very successful - when all those processes work properly, when they’re documented properly, and everybody’s on board with making them happen.”

Doug also noted that early on, there are a lot of easy process wins. Things that make you say, “Why haven’t we been doing this forever?” But as you continue to build your business and your processes, things get a bit more complicated.

“You know, you change one process down at the base level, and then you quickly realize that it affected three other processes as well,” Doug said.

However, if you have created a culture at your shop where change is seen as a benefit and not a challenge, process changes can be less painful.

“Having changing marks all the time is hard on a lot of people, but when people see the benefits involved with it, they see that it’s worthwhile,” Doug said.

One way to ensure your team recognizes the benefits is by using metrics. 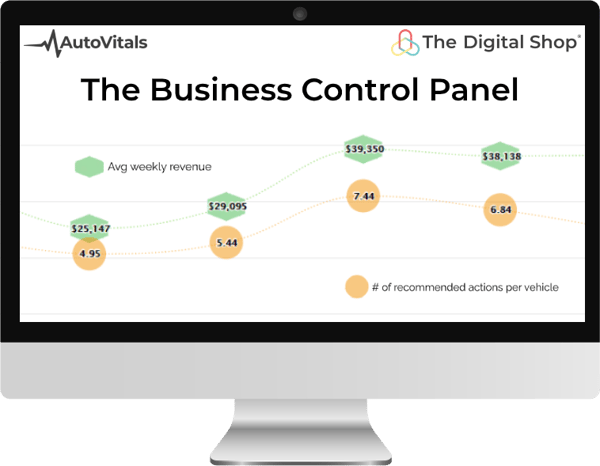 “You’ve got to measure what’s going on,” he said. “If you’re not measuring what’s going on, you’re just kind of feeling around in the dark, trying to figure out what you need to improve on.”

Doug uses the Business Control Panel as one of his KPIs. Then, he shares the wins with his whole staff, and it makes a difference.

Downtown Automotive was still in the early stages of implementation when Doug was a guest on The Digital Shop Talk Radio, but he had already seen some tremendous results.

1. Live updates make the life of an SA easier 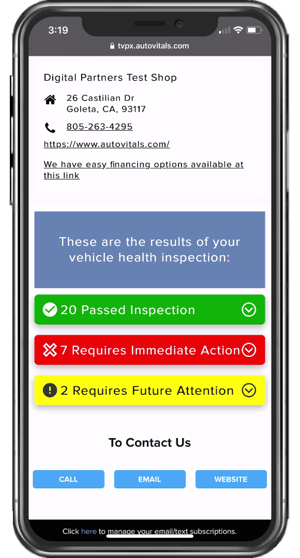 “A couple of things that this is making a lot easier for them [the SA] is to be able to provide live updates as people request more services at the front counter,” Doug said. “We’ve long presented all of the deferred work from the previous service at the new appointment, but now we can build that into their initial authorization really quickly and efficiently. It provides a much cleaner interaction at the front counter for people.”

Instead of having to pencil down numbers on a paper authorization, now Doug’s SA’s can show motorists exactly what the techs are going to do live and give them concrete numbers.

Using the integrated Protractor and AutoVitals system, Doug’s crew is now able to pre-build all of their work orders days before the motorist even steps foot into the shop.

“I can’t say enough about the relationship of Protractor and AutoVitals,” Doug said. “How your two companies work so well together and the features involved in both. With Protractor, we’re pre-building all of our work orders so that at least the day before, often enough as the appointment is actually booked, the work order gets built. That gives us the opportunity to also have all of the previous deferred work incorporated into that work order.”

Presenting this information to the vehicle owner is also made easier with three tabs open on the monitor; authorizations for the work requested that day, deferred work, and the vehicle inspection results from their last visit.

“This gives people a great overview before we even look at their vehicle at all, right?” Doug said. “The number of additional items flagged for people are huge, and anytime we can do that before we’ve even laid hands on the vehicle, we’re improving our technician’s efficiency.”

The new system has also allowed customers to become more knowledgeable and involved in their car care. They’re already educated about the fixes that need to be done thanks to the digital vehicle inspection, and these changes give them predictive costs. In addition to setting expectations by letting them know what deferred work needs to be addressed at their next visit, they have the opportunity to save up and plan for those costs.

“Those are some critical building blocks,” Doug said. “You’re going to struggle with selling that deferred work unless you’re doing the inspections and the quoting properly.”

To measure the results of this change, Doug has started monitoring a new KPI.

“One of the big numbers that I’ve started tracking recently through both Management Group as well as looking at the AutoVitals stuff is sales of our deferred work,” Doug told Tom.

The numbers, according to Doug, are mind-blowing and leave a lot of room for improvement.

For example, in a month when Downtown Automotive has done 120K in sales, the deferred work they didn’t sell was at the 250K mark, according to Doug. That means they’re only selling a third of the work they’re identifying on vehicles, which leaves a lot of opportunity out there.

“Experience has started to show that our deferred work sales needs to be measured as a percentage of deferred work,” Doug said. “So, on that 250K of deferred work that we didn’t sell, we sold $25,000 in deferred work. So that’s not from that same work order, that’s from previous work orders as well. So that kind of 10% range seems to be about where we’re hovering now and putting even just a couple of percentage points on there is going to make a huge difference.”

It isn’t just the money driving Doug and his crew.

“We’re able to better take care of people’s cars because they’re actually doing the work that we’ve recommended that they do,” he said. “We’re talking about ARO and technician efficiency increases. We’re dealing with less vehicles, higher repair orders on the vehicles we do have.”

Paperless service counters; the deep end of the pool

Doug is extremely excited about running a paperless front end, but he stressed it isn’t something that can be done early on. Instead, he looks at improving your automotive repair shop as a giant pyramid.

“[The pyramid] is full of huge blocks,” he said. “Some blocks are a lot heavier than others. Some have to go way high up on the pyramid; some have to be right down low, right? And as you get all those blocks built up and built up and built up, you realize that there is no limit to how high that pyramid’s actually going to get. There’s always advances that we can do in our industry. There’s always technology that makes new processes available to us as well, too, and that’s a big thing. You have to be very aware of when you’re trying to place a block up high that needs three other blocks down below it to support it. That’s again, one of the huge challenges with a bunch of process change and shop development and everything like that. It’s also the part that makes running an automotive shop so exciting because there’s always more. There’s always more. We can always do better. We can always improve on things, and that’s what keeps me coming back every single day.”

Eight years ago, Jill Trotta felt uninspired with her career in the automotive industry when she...