If you have to boil down the Shop-Ware and AutoVitals enhanced integration into one word, Frank Scanduara would choose unprecedented.

“It’s not normal,” said Uwe of the collaboration between Shop-Ware and AutoVitals. “It’s unprecedented that the point of sale vendors and [AutoVitals] work in such a collaborative way.”

Carolyn was also very pleased with how the enhanced integration fell into place.

“We’re obviously proud to not only provide our product but be able to leverage our product to the rest of the industry,” she told Uwe, Frank, and Tom. “We have our own problems to solve, and then we want everyone else who is solving other problems to be able to additionally reach those customers. What’s so critical about shop management software systems and why I’m passionate about solving that problem and not something else is that it’s the center of the business. It’s the system of records - the system of engagement. So to the extent we can create an ecosystem that allows shops to meet all their various needs with that one connected environment is not only our mission but also absolutely critical to the future of the industry.”

As a customer, Frank shared he has found the partnership between Shop-Ware and AutoVitals refreshing.

“It’s very exciting to see the working together and innovation, and the changes that are possible - and quickly,” he said.

The difference offered with expanded integration

Frank has been around the block with shop management software systems. One year, he switched systems in March and again in August when the POS systems weren’t working for his shop.

Now, with Shop-Ware and AutoVitals, he has seen a lot of benefits. 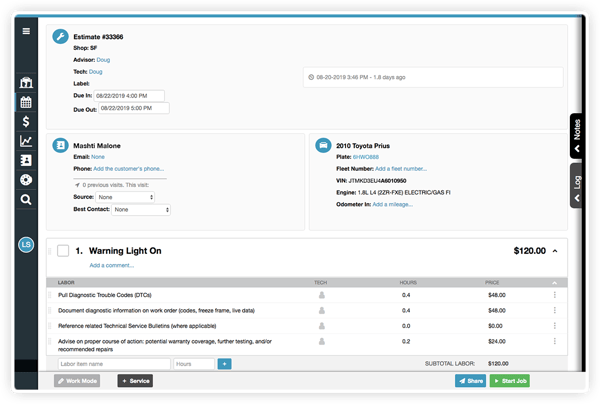 A view of a Shop-Ware repair order. Graphic from here.

“The system we used before was just too general, and one of the things I love the most about Shop-Ware is where I can go into a car and say, ‘Hmm, what have I done in the past with this car,’” he said.

The system then pulls up the history, and Frank and the crew can see information on what they have done in the past and apply it in seconds.

“Compared to anything else out there, and to see all that come together, man, it’s just exciting,” he said.

“If you really look at how you run a shop, every shop behaves like it opened yesterday,” Uwe said. “Every estimate is written from scratch.”

He knew there had to be a better way. This integration offers that. But Uwe was also quick to note this doesn’t mean the service advisor or front counter is going anywhere.

“No matter what digital technology we’re going to implement, the service advisor is still the focal point for the customer,” he said.

Delegating to the machine: leave the human tasks to the humans

The integration between Shop-Ware and AutoVitals has one common goal: efficiency. According to Carolyn, the path to efficiency is paved by giving computers the tasks humans aren’t as good at.

“The key realization that this industry has come to, or is coming to, is that paper is not your friend. Paper is your enemy,” she said. “Anytime you look at a piece of paper anywhere in your shop, you’re looking at wasted time, and you’re looking at potential error. That’s because paper is a human-powered technology. Every piece of paper gets moved around your shop by a person; someone has to look at it, someone has to print it in the first place, and someone has to track it. Whenever you introduce people, now you’re introducing human time, and you’re introducing human error.”

While she admits paper is a technology, she stressed better - more valuable technologies have replaced the 500-year-old technology.

As pressure around profitability continues to increase inside automotive repair shops, Carolyn says it becomes more and more apparent that your shop’s extra profitability and extra efficiency comes from removing all the human effort you’re spending, starting with paper.

“Human intelligence is incredible, we can do so much between our ears, but when you spend time doing stuff between your ears that could be better spent done by a machine, then all of a sudden you’re cheating yourself,” she said. “You’re wasting your very precious time doing something that doesn’t need to be done by you, and then you’re only able to get so much done in your day.”

She provided examples of letting humans talk to customers about their vehicle priorities and what maintenance they care about while leaving processing stuff like tracking time to the computer.

Change: Good for your shop and the industry

Every guest on The Digital Shop® Talk Radio panel admitted to knowing shops that carry the mentality of “if it ain’t broke, why fix it?” But in today’s information age, digital shop software providers like Shop-Ware and AutoVitals, and trailblazers like Frank don’t see how “living life through the rear-view mirror” helps anyone. 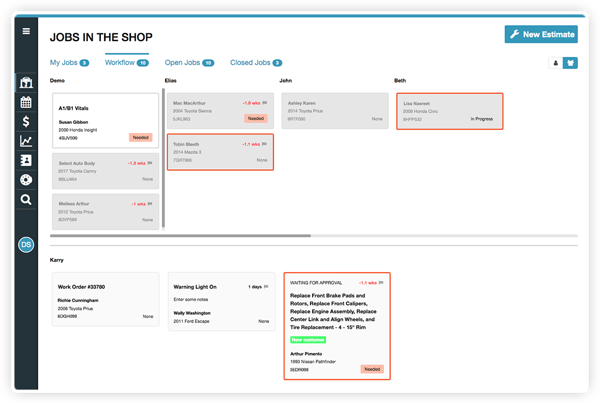 A view of workflow in Shop-Ware. Graphic from here.

Carolyn believes automotive repair shops have been deliberately left out of innovation.

“I think that the industry likes to keep us down,” Carolyn told the panel at The Digital Shop® Talk Radio. “I don’t think that empowered, capable shops have been necessarily what the industry has wanted. I think if shops are dysfunctional, then vendors get to keep more of their money, and customers get to keep more of their money. So having shops have a seat at the table hasn’t necessarily been welcome.”

While the future of vehicles may be changing to more self-driving, those cars will not be self-fixing.

“We’re a critical component,” Carolyn said. “We’re the hand that rocks the cradle, and getting us to where we need to be is something that I am particularly passionate about.”

This passion has driven her to think outside the box from a solutions perspective. Instead of just creating a legacy system in the cloud, the Shop-Ware team is working to rethink what shops are doing in a cloud-based environment.

“I’m trying to not take an incremental step but to really make the leap, and that is tricky,” she said.

Change can be challenging

Frank believes seven words are dangerous to an organization: “We’ve never done it that way before.”

“Listen, everybody hates change,” he told The Digital Shop® Talk Radio crew. “But the only constant in life is change, so let’s just move forward, figure out a way to make it less painful, because complacency is what destroys innovation and destroys progress.” 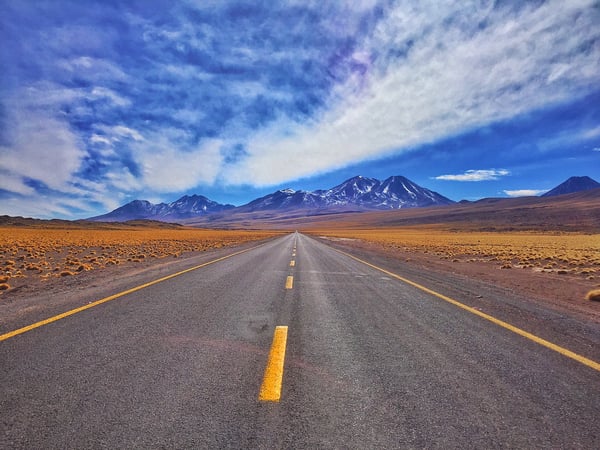 Looking towards the future.

That forward-thinking approach is what drives Carolyn and Uwe as they continue to update and tweak their products for the coming weeks, months, and years.

Uwe also happened to share one of his favorite statements: “Get comfortable with the uncomfortable.”

He believes change can be fun.

“If you make that a constant habit of not expecting it to be perfect on the first day, but investing and chasing your goal, I think the sky’s the limit,” Uwe shared. “That’s what excites me about this industry - there is so much potential. 66% of all technician findings are not being sold to the customer. Are you kidding me?”

Identifying things like that and eliminating them remains exciting to Uwe and the team at AutoVitals.

As the automotive aftermarket industry continues to evolve thanks to new technologies, Carolyn is excited about what the future looks like at Shop-Ware.

“The paradigm for shop management historically has been we all just copy each other, we steal each other’s customers, and we kind of already know what the end game is,” she said. But looking ahead, Shop-Ware is focused on a wholly different approach: “stop having humans have to make all the decisions.”

Specifically, she means following the path of the motorist’s journey and connect those dots with technology.

For example, AutoVitals has this connection already created. AutoVitals knows an inspection will be done, and from the inspection, it populates recommendations on to the repair order. These steps have been optimized for motorists to say yes, instead of requiring an SA to get on the phone and sell.

Carolyn shared its been shown customers are 12% more likely to click yes when using software like this as opposed to having someone call them on the phone.

“For the business to be able to run with less and less human capacity, that’s obviously where we’re headed,” she said.

But Frank jumped in and wanted to clarify what Carolyn said.

“Don’t confuse what Carolyn said with less human interaction,” he stressed. “It doesn’t mean we need fewer people to get the work done; it means we can use the people we have more efficiently, more effectively, and with less pressure.”

Uwe jumped in and said he believes the family and football talk isn’t going anywhere because that transparency and trust are still essential parts of the transaction.

She referenced artificial intelligence (AI) and how it often transitions into a conversation about how soon humans won’t have jobs. But that isn’t what she believes.

AutoVitals is excited to announce an upcoming online industry event: The Digital Shop® Summit on...