How do you eat an elephant? One bite at a time.

Dennis Eidson, owner of an Honest-1 shop in Roswell, Georgia, and recent adopter of The Digital Shop®, has admittedly only taken a few bites of the digital shop, but he’s already seeing huge benefits.

One bite at a time

“Don’t get overwhelmed by the elephant,” Dennis shared. “There are a number of little things you can do to have a huge impact on your business very quickly.”

He should know. After a 25 career in the corporate marketing world, Dennis changed gears and bought an Honest-1 franchise. Nearly ten years into shop ownership, he was plateauing and knew there had to be more he could do.

He started using AutoVitals in early 2019 and has seen some staggering increases. Tom Dorsey, host of The Digital Shop® Talk Radio told listeners, “Dennis is up 34% in ARO in the last year, and that’s through COVID.”

But Dennis knows he has only scratched the surface.

“I don’t even feel like I’m close to the potential that we have here,” Dennis told Tom and Uwe Kleinschmidt, founder of AutoVitals. “As good as we’re doing, I keep kicking myself for the things that we’re not doing well and all that opportunity to continue to get better.”

Dennis breaks down his entire history here, check it out!

While he’s spent a decade in the automotive industry, his marketing roots were on display as he put together a presentation to walk through his business history.

He shared that the shop grew pretty steadily during his first five years in business, but their volume flattened out in 2016 - 2018. Their profits were up, and ARO was increasing, but it was below where Dennis thought it could be.

Enter AutoVitals in 2019, and his Honest-1 shop took off. 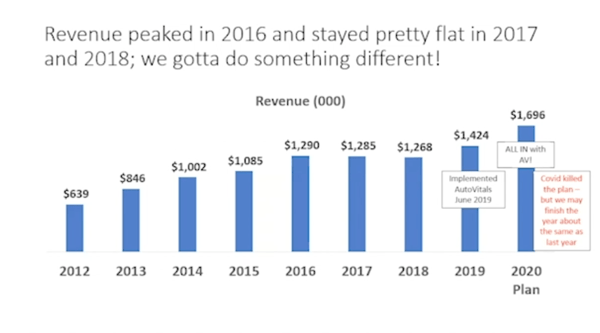 “I’ve grown my ARO in the last year the same amount I had grown it in the prior five years,” he shared. “I just knew from industry conferences and talking with other shops that while our ARO was great and at the higher end of the Honest-1 store’s ARO, I still felt like we had a long way to go.”

His hesitation in going digital was based on a concern for negative customer feedback. He didn’t want to push his motorists too hard or come off as “just trying to sell them stuff.”

However, a year into his digital transition and the shop’s 200 customer reviews averaging 4.6 has now turned into more than 400 reviews and a 4.8-star rating.

“You go through my Google reviews, and you’re never going to find a customer complaining that we tried to sell them stuff that they didn’t need,” he told Tom and Uwe. “The reverse of that is since we’ve been doing better inspections with AutoVitals, we have dozens if not a hundred reviews online that point to that digital inspection as ‘Wow, this is something really cool that they do at the shop.’”

For some, growing car count is another way to improve revenue at their automotive aftermarket shops, but that isn’t necessarily an option for Dennis. His small parking lot (11 spots) and finite bays (6) have led him to find other ways to grow his shop.

“It’s not real easy to grow car count with the space that I have, so I had to do it with ARO,” he said. “Feedback from our customers is always great; they’re very, very loyal. I just felt like, to grow my business, I am not growing it by doubling my car count. The way to grow my business is to take advantage of the cars that are here.”

He has grown his ARO in small steps until now, but he has big plans for the future.

The mindset which accompanies going digital also required him to make a tough decision recently, letting go of a tech who had been with him for more than six years.

“If you believe, like I do, that this software has and will continue to change my business for the better, you might have to make some people changes.”

Dennis has noticed that while he believes so strongly in DVI and all of the benefits, he’s not alone in his admiration.

“The feedback from the customers in the service we’re providing with these digital inspections is unbelievable,” he told Tom and Uwe.

He said he could choose from hundreds of stories, but a recent customer encounter summed up his experience with DVI well. This particular motorist had come in for a pre-purchase inspection, and after they wrote up a ticket for $2,200, Dennis was giving him a ride to his office a few miles away.

“He said, ‘That’s the greatest thing I’ve ever seen, that digital inspection,’” he told Dennis.

It is a significant factor in improving customer service in an industry which needs it, Dennis admits.

“This is an industry that needs really good customer service, and it’s not hard to be better than the competition because the competition is not real good,” he said. “I think I’ve done a pretty good job of putting the right people in place - that’s front counter people, that’s technicians that are customer-centric customer service oriented - and the brand Honest-1 we preach that. Ten years later, I’m living it, and I really believe that this [DVI] is just another huge arrow in the quiver of that customer service attitude.”

During normal times, the numbers Russ Crosby is producing at his auto repair shop, Russ’s Wrench in...

Eight years ago, Jill Trotta felt uninspired with her career in the automotive industry when she...