4 Ways to Add Value to Your Digital Vehicle Inspections (DVI)

In a world filled with digital shops, digital vehicle inspections (DVI) are essential; but essential doesn’t have to mean boring. Neil Daly, owner of Oceanside Motorsports (OMS) in Oceanside California, has found four ways to keep his technicians fresh and inspections streamlined and personalized for customers.

Neil’s shop understands the importance of vehicle inspections, and in an effort to keep his auto techs fresh, he organized an inspection clinic where all his techs inspected the same car.

Once the motor vehicle inspections were complete, Neil went through each DVI with his entire team. This allowed them to see where they had made mistakes or where others were doing things differently.

“Everybody knows that every technician has their strong points of what they look at,” Neil told Tom Dorsey in Episode 17 of The Digital Shop Talk Radio. “The point of this was to just highlight the strong points of everybody and allow us to attempt to have as close to the same inspection as possible.”

Learning from each other also allowed Neil and his team to recognize areas where they needed to improve individually.

“On mine,” Neil said, “I missed that it had a cracked belt because I had looked at the main belt from one side, but the other guys caught the AC belt on the bottom. [The inspection clinic] made it so I was like, ‘Wow, I missed that, I am not going to do that again.’”

Neil and his techs also realized the average picture count varied widely. Some inspections had as few as seven or eight photos while the more comprehensive vehicle inspections had two dozen or more. 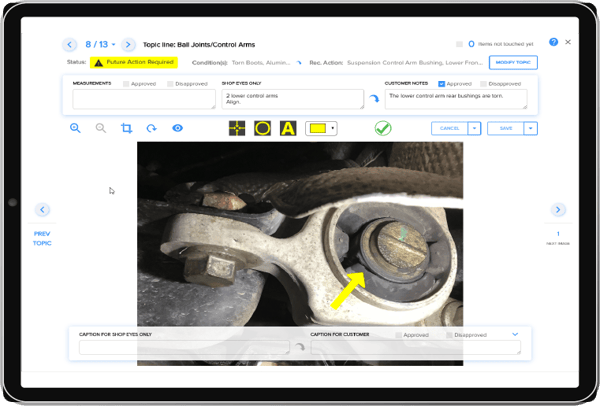 With color-coded circles, arrows and notes, the motorist can easily tell what needs fixing (red), what repairs can wait until next time (yellow), and areas of their vehicle in perfect health (green).

At the end of the clinic, Neil built two estimates, one using the “worst” inspection and one based on the “best.”

The difference was staggering, Neil said.

“It came out to be a $6,000 difference,” he said. “It showed our technicians that a little bit of extra time in the inspection – which it did take the guy about ten minutes longer to do it right, still under our 30-minute mark – but an extra ten minutes really gave a better service to the customer and allowed us the possibility of having some more work.”

Neil told Tom that he planned on continuing these inspection clinics not only to keep his techs fresh but also to continue to bring his team closer and closer to giving the same inspections.

“I’m sure it got us closer,” Neil told Tom. “I’ll still get a different inspection from everybody if we were to put the same car through the shop again, but it would be a little bit better.”

“We all made sure that we had the same measurement tools,” he said. “We have the same brake pad measuring tool, the same thing for the tire tread depth.”

He even makes sure to provide his new techs with a little kit that has all the inspection tools they will need.

Neil says the standardized kit serves two purposes. First, the customers can become familiar with the tools and understand what they see in pictures. Second, the techs and customers can easily compare the images and readings from an old annual vehicle inspection to a new one.

“You can show the old pictures from the last inspection next to the new one,” Neil said. “That’s super valuable. It allows us to see that percentage go up if it’s going to over time and all that good stuff.”

However, it isn’t just the measurement tools that Neil has made consistent across the shop; he has also jimmy-rigged a solution to the always-present question of “How do you get sufficient light to take inspection photos?”

For Neil and his team, it just took a snap light and a few magnets, and now all of the inspection photos are well-lit.

Neil Daly explains this trick he used to add more light to his pictures.

3. Comprehensive Inspections: personalized for customers, fun for the crew

When it comes to DVI, Neil and his crew want to make sure they are keeping cars roadworthy and building customer relationships at the same time.

“You’ve got to keep it fun, and you’ve got to always show the positives of the car, too,” said Neil.

That can be as simple as taking a photo of something the customer fixed last time and letting them know how well it’s working, or taking a picture or making a note of a cool license plate frame or a modification the owner is proud of.

“That’s part of the service provided at check-in,” Neil said. “If that’s expired, and some people don’t even realize, we’re going to be around to catch it.”

Another personal touch Neil uses at his shop is the technician pictures. 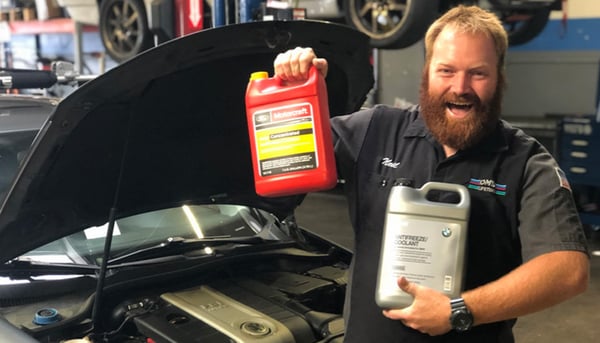 By incorporating a little personality into their pictures, Neil's team stands out in a big way

“We encourage the guys to make it a little bit more personable,” he said.

But it doesn’t just have to end at a nice photo. Neil has dreams of customizing those photos for different holidays or events. One example he mentioned to Tom was wearing a turkey hat for Thanksgiving. He believes those special touches create a bond with customers and create loyalty to a business.

“We haven’t gotten that far yet, but I think that’d be a cool personal touch that people would appreciate.”

Neil acknowledged that with digital vehicle inspections, it is so easy to say “not on this car,” or “not for this guy,” or “they’re not going to buy anything.” Still, those are often the people who end up using the information from the inspection to make repairs or improvements.

Here are a few more tips and tricks that Oceanside Motorsports uses to make sure their Digital Inspections are valuable for the shop and their customers:

Want to hear more from Neil?

Techs Writing Estimates? Not at These Shops

Should your techs be writing estimates? That was the topic of discussion on a recent episode of The...