It’s no secret; women in the automotive repair industry are outnumbered. But, that hasn’t stopped Kathleen Jarosik or Kim Hickey from success.

Kathleen was named the 2018 Female Shop Owner of the Year by Women in Auto Care and the Auto Care Association for her shop Xpertech Auto Repair in Englewood, Florida. Kim started her shop from her driveway and turned it into a successful business before transitioning to ATI, where she works as a full-time coach and has earned the reputation for being the best of the best.

Growing up, the automotive industry wasn’t a dream for Kathleen or Kim. They both just stumbled into the profession, which turned into their passion.

Kim accidentally started a shop more than 30 years ago. She had moved to Arizona to take care of her sick grandparents, and she was taken advantage of during a trip to a local garage to check the breaks on their car.

They wanted to replace the air in her tires, and they were going to charge $25 or $30 a tire.

“It didn’t sound right to me,” said Kim, who was 20 years old at the time. “But I was leaving, and I said no, and then they were like, ‘Well if you don’t care about your grandparents getting in an accident. Hopefully they have good reflexes if there’s a blowout.’ So I thought, oh my god, I’m going to kill Nana and Pop-Pop, go ahead and do it.”

That experience soured her, and so she set out to find a technician she could trust. She found one close to home – a neighbor was working at a shop that was transitioning from full-service to a tire shop. She hired him to take care of her grandparent's car, and when word spread, he was soon fixing the vehicles of all their friends and neighbors.

“To be a female, I just want to say, you have to know more than everybody else,” Kim said. “You have to work harder, you have to be more confident, and you have to be ready to take a lot more punches because they will look to knock you off your feet.”

One day, when she had 14 cars in her driveway, her neighbors requested that she find an actual shop. When she moved, the business continued to grow.

“It just exploded the business because of people looking for an honest place to come,” Kim told Tom and Kathleen in a recent episode of The Digital Shop Talk Radio. “Besides the honesty, I think they really were looking for somewhere to make them feel like home because they want to trust, they want a relationship, they don’t want to be transactional.”

She continued running a successful business for many years before joining ATI as a coach, and shortly after, sold her business.

A family affair to a passion project

Kathleen got into the industry at first because of her husband. In 2003, her family was looking to move, and they found an auto body shop to look at in Englewood, Florida. It wasn’t the right fit, but the owners of another garage met with them and soon handed over the keys.

The plan was to have Kathleen run the shop while her husband would work as the auto tech. Six years later, Kathleen and her husband parted ways, and Kathleen bought his half of the shop.

“Of course, I had no idea what I was doing, and I struggled,” Kathleen shared with Kim and Tom.

Then, in 2016 things changed when she made the decision to hire a coach and found a community of other women in automotive.

“I ended up at [the women in auto care] conference in Orlando in 2016 and fell in love with the industry and that I wasn’t a unicorn anymore,” Kathleen said, though, with three brothers, she was used to being surrounded by men.

Yet while Kathleen and Kim are both proud of where they are and the impact they’ve made in their communities, it was far from easy.

Kathleen typically greets her customers with a “Good morning, how can I improve your day,” and for many years, the response she would receive was, “I want to speak to somebody who knows something.”

“I can’t tell you how many times I’ve gotten those exact words,” she told Kim and Tom. “And I realized that that was an opportunity to educate an entire group of people. I would joke with some and say, ‘You know, I know how to raise your bill a half-hour every time you say that, so why don’t you give me a shot.’”

Kim often ran into the same scenarios, but, it wasn’t just customers who could make things challenging, even people in the industry liked to mess with these female shop owners.

“I went to the parts store, and I handed them [the bolts], and I said, ‘My tech said I need these,’ so they gave me some and they didn’t look the same,” she said. “I said, ‘They don’t look the same,’ and they said, ‘Don’t worry, honey, go back, and your technician will know what to do with it.”

Her technician yelled at her when she returned with the wrong bolts.

Kim and Kathleen filed these situations away in the back of their minds and when their shops were successful, she knew who she could trust.

“I remembered everybody’s name, and as I grew and grew into the million dollars and more, I knew who treated me respectfully coming up and who thought it was a big joke and a lot of fun to do that,” Kim said.

With nearly five decades of automotive experience between them, Kim and Kathleen have also seen the industry change over the years.

As a result, Kathleen is seeing less and less of the stigma which previously came with being a woman in auto. While she says there are still hurdles, she hopes the next generation won’t have to fight as hard.

2. The culture around cars has changed; nowadays, motorists know much less about their vehicles

People are no longer tinkering with their cars in the driveway, said Kim. This change has meant that people aren’t as knowledgeable about cars as they used to be.

“Men used to come in and say let me talk to somebody who knows something,” Kim said. “Men don’t know anything about cars anymore. I mean, who does? You look under the hood, and you’re like, ‘Holy Toledo.’”

A female at the front service counter helps with this, according to Kim.

“Having a female at the counter that men perceive as not knowing as much, it’s almost a comfort zone to them, and they’re more comfortable being honest and saying, ‘I don’t really understand this,’ where they would not say that to a male service advisor.”

3. Cars have transitioned from mechanical to electronic, and quality techs are hard to find

Things our parents or grandparents used to fix on their cars now need computers to reset or technology to solve.

Instead of mechanical part changes, a high percentage of work for auto techs is now computer programming, and people who have those degrees have many other career options, including Google, to choose from, said Kathleen.

“The automotive business is not about fixing cars anymore,” Kim said. “It’s not the guy or the gal going and working on a car and that’s it. Owning a shop is so much more. You’re a psychiatrist. You’re a marriage counselor. You’re a grief counselor. You are all kinds of things. You are an educator. There are so many facets to fixing a car, and I’m not taking anything away from a technician, it’s very difficult, but that is almost periphery.”

“We are way more about building relationships,” she said. “I have a couch I sit on. We sit next to our clients on a couch. We get to know them; about their kids, their grandkids, their pet iguana… They come here and talk to us. This is way more than, way more than, an auto repair shop.”

While big chains had their moment in the auto world, Kim and Kathleen believe the service and relationships that smaller, independent shops offer is the way of the future.

“[Customers] want to go like Cheers, they want to go where everybody knows your name,” Kim said. “They want to feel comfortable. They want to go in and tell you about their dog or their kid or their whatever, and that’s where I think the independent shops they’re going to continue to rise and rise.”

Kathleen agrees, and because of one reason: millennials. She thinks that generation gets a bad rap and is inspired by their different shopping methods.

“The younger ones want to make sure that the dollar they spend with you isn’t going to some greedy money-hungry machine,” she said. “They want to know that they’re feeding my children.” 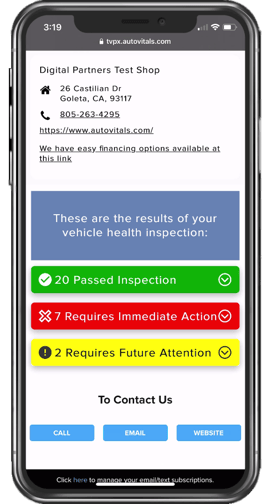 Another significant change Kim and Kathleen have witnessed, the emergence of digital shops and the tools they bring.

According to Kim, digital vehicle inspections (DVI) have leveled the playing field.

“When you have that red, yellow, green, it doesn’t matter what the customer knows or if it’s a man or a woman,” she said. “It levels the field, and so now we’re talking about visuals and not having to be so technical anymore and giving all the information.”

Kathleen has also noticed the impact DVI has on her auto shop’s credibility.

“We have a stigma of being a dishonest trade,” she said, acknowledging that she has felt it first-hand. “But [the DVI is] really going to separate the people that are in this to do the right thing from the people that aren’t, and I think that is a phenomenal tool that we are able to use.”

Taking the guesswork out of car maintenance by having pictures and information from the auto techs is changing the face of what Kim and Kathleen do.

“Making it much easier for us to educate our clients, the public, and really it makes it so we don’t have to work so hard,” Kathleen said. “We really don’t.”

Providing their customers with information from the vehicle inspection, it is now up to the vehicle owners to decide what to fix or not. That transparency elevates the entire auto industry, according to Kathleen. 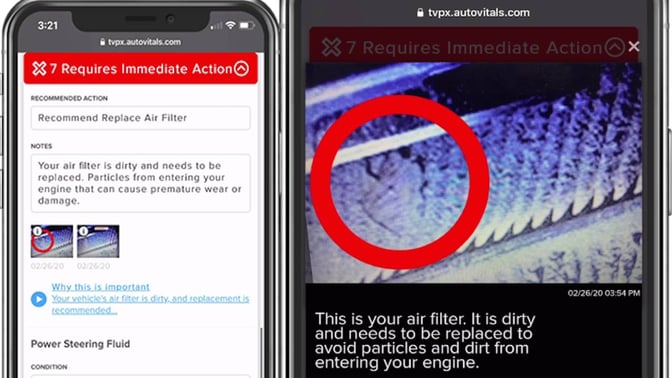 As trailblazers in the male-dominated world of car shops for the last several decades, Kim and Kathleen have no plans of stopping.

Kathleen hopes to share all of the knowledge she has gained over the last few years with people who are also passionate about cars.

“If I can inspire somebody to do anything, it doesn’t even have to be automotive,” Kathleen said. “Whatever it is, to overcome that fear and do what you love and be passionate about it and go to bed tonight a little bit better than you were when you woke up this morning. That is a goal for me.”

Kim is working with her auto shops to get kids excited about cars. Even things as simple as little electric trucks that need a battery changed could spark interest and passion. The Boy Scouts and Girl Scouts have a badge for auto repair, so her shops are also educating children and their parents to get the word out about automotive repair.

Want to hear more from Kathleen?

Click here for more info on Kim and ATI.